Before I get to my November Manifesto, I had two final finishes for October. Stacy Nash's Jack Treat Bag and Hallows Eve pinkeep: 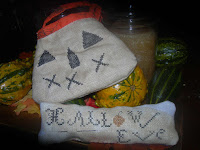 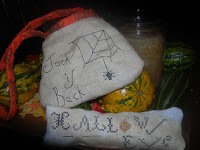 Back of Jack Treat Bag 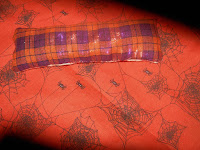 Fabric used for lining treat bag
Backing fabric for pinkeep-yeah, my homespun has a touch of bling, that's how I roll

November Manifesto
My plans for November are many:
1)Finish Primitive Needle's Black'd Skie
2)Make solid progress on Scarlet Letter's Emma Lerch
3)Finish the oldest son's Christmas stocking-Drawn Thread's Stefan's Christmas Stocking
4)Start the middle and youngest son's stockings-still debating a pattern for the middle son but the youngest has chosen BOAF's Wish Upon a Star Christmas Stocking.
5)Stitch some ornaments(designs and who they are for to be determined later)
There are probably more but right now these are at the top of the stitching priority list.
The other goal is to finish Nanowrimo this year. I have a writing schedule, I know the story I want to tell and with the oldest son finally employed I can do it. I am allowing myself a shitty first draft, thank you Annie Lamott and I'm just going to do it. I have a series planned, I know the stories of the first three books, I have a YA spinoff series and a prequel series and another spin off series. I just need to not have to share a computer and now for five hours Mon-Thurs I don't have to. I am going to do this. If everything goes as planned, of course it won't, I'll finish the first draft early, won't look at it again until January. Then I'll rewrite, then let a few friends read it, then rewrite it again, then see if my agent is interested and since she doesn't represent this kind of book, she won't be, then I begin the search for an agent. I have seen this book published, It will happen.
I love creative visualization. Creative visualization - Wikipedia, the free encyclopedia
Anyone remember that scene from An Officer and a Gentleman where Debra Winger tells Richard Gere that if he sees himself flying jets it'll happen? Yeah, my life's philosophy based on a movie. If you see it, it will happen. My mantra. Kind of like George Costanza's "If you believe it, it's true" philosophy.
YouTube - Jerry, just remember. It's not a lie... if you believe it...
Happy November 1st!

Melissa
A record of my love affair with the Little X, attempts at other needle related projects, upcycling other people's trash, life near the beach, attempts at gardening, dreaming of urban chickens, learning how to be a homeowner after 30 years of renting, books, food, coffee, wine...and definitely tequila 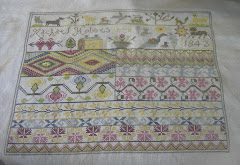 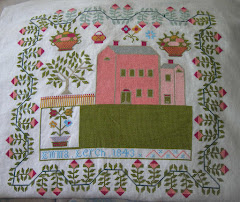